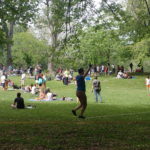 Weekends  are very relaxed in Kuwait.  For most of the year it’s warm enough for us to spend mornings at the pool or beach, and I can go for a run on the boardwalk.  By May, we try to be at the beach club by 9 AM so I’m not running in 40 degree Celsius weather.

In 2015 it was our good friends Vanessa and Ahmed’s first summer with their twin boys.  These little Canadian-Egyptian babies swam in the heated pool all through the winter while I watched nice and dry, from a chair by the pool with a sweater on. Yet, while I breezed through a five mile run at 10 AM in the beginning of that summer, these boys couldn’t stand the May heat. The boys spent the morning under sale shades that covered both the pool and the grass area where we had lunch.  They were never in direct sunlight for more than a couple minutes, but they still spent the entire next day in bed. Despite never being in direct sunlight the three of them (the boys and Vanessa) got heat stroke and spent the entire next day lethargic at home. So, Vanessa and I went to her mom in Canada, each with an infant on our lap to save the boysfrom Kuwait’s summer inferno.

That’s where I met homemade yogurt.

It was a crisp, cool morning in Montreal, one that reminded me of my childhood in Northern Virginia.  I could still feel the lingering touch of winter in the cool breeze that swept across my face during my morning run.  After an incredible waterfall shower, I followed the smell of baked dough to the kitchen.  I felt so relaxed in Lulu’s home.  Just when I thought I couldn’t be more relaxed, Lulu offered me a plate of homemade waffles with what looked like whipped cream on top.  My sore muscles screamed in protest.

My eyes widened and I took the plate to the small table next to the window.  Up close it was clear this wasn’t whipped cream.  The tight white balls lacked the velvet texture created by air bubbles in the whipping process.  I poured a drizzle of all natural Canadian maple syrup over the dense flowing white waves.

I sliced a forkful of the yogurt, and pierced the slightly browned waffle as I swiveled it across the plate for just a little more syrup, and took that first awesome bite.  I savored the cool, tart, milk based yogurt and warm waffle soaked in sweet syrup for as long as I could.  Then I devoured the rest of my plate.  It was fantastic.

Lulu’s yogurt was awesome because, it was yogurt.   The United States Food and Drug Administration defines yogurt as the food that is created when dairy ingredients are cultured with “the lactic acid-producing bacteria, Lactobacillus bulgaricus and Streptococcus thermophiles.”   In other words, your yogurt should have two ingredients in it, milk and culture. The list of approved ingredients by the FDA does not include artificial sweeteners, preservatives, milk protein concentrates or artificial nutrients other than Vitamin A and D. Most products, such as Yoplait, Danone and store labeled brands include all these ingredients.

In November 2014 the Cornucopia Institute, a research group that promotes “economic justice for family scale farming”, released a report titled Culture Wars: How the Food Giants Turned Yogurt, a Health Food, into Junk Food.  Their scathing investigation shows how pretty much all the yogurts in the supermarket isle with any flavoring are not just unhealthy, but very bad for you.  Most of them do not contain real fruit or honey, brands like Horizon, Dannon, and Yoplait include carrageenan, a food additive used for thickening and known to cause gastric distress, and almost all of them include artificial sweeteners.

Yogurt is supposed to be good for you.  The two bacteria mentioned above should especially help people taking antibiotics and are therefore missing essential gastronomic bacteria or are suffering from diarrhea.  But when you add all that other stuff it can do the exact opposite.  It’s such a simple ingredient that it really doesn’t take that much time to make it once you get the hang of it.  That’s why when I decided to start making everything at home, the first ingredient I had to try was yogurt.

Continue to Part II: How to Make Homemade Yogurt

From Fake Food To Real Food

How to make Homemade Yogurt